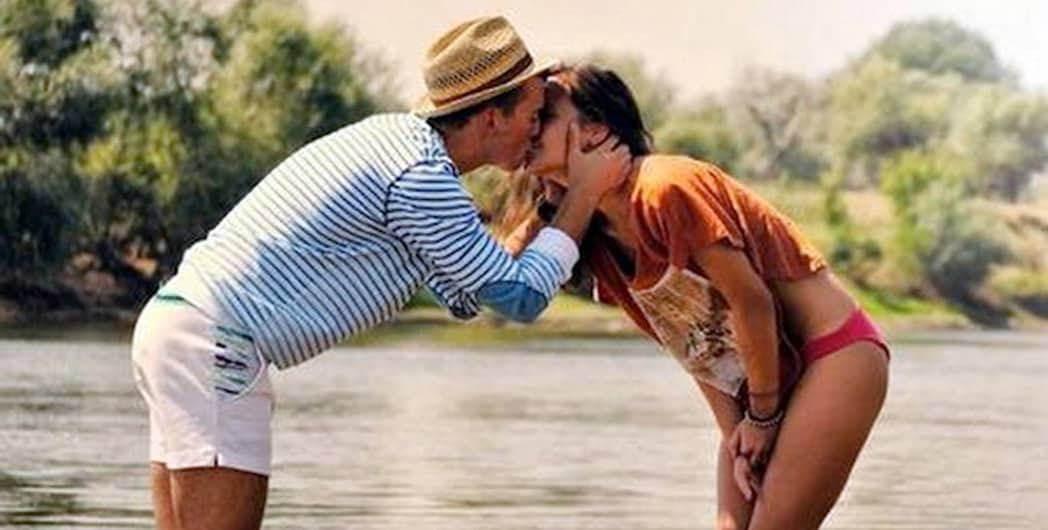 Okay, ladies. You know how whenever you crush on a guy, it can be extremely frustrating to know if he likes you? Many guys are dense, and I mean that in that in an endearing way—it’s not their fault; a lot of guys are non-communicative by nature. Or maybe it’s nurture. Mommy-issues much? Anyhow, as impossible as it may be to “read” a guy’s psyche, here are 10 tell-tale signs that a guy likes you.

1. He Looks Into Your Eyes

The eyes are arguably one of the most attractive parts of a woman. “Smoky” eyes alone have sold billions in eye cosmetics so that women may continue to entice the guys with fawning looks with luscious lashes soaked in lust cast through the crowd, inviting him to you from across the room. It’s all about the eyes. Some say the eyes are the gateway into another person’s soul.

Eye contact is good, but meaningful eye contact is the first tell-tale sign that he likes you. (Catching a glance of his eyes when he looks up from his phone is NOT considered eye contact.) Draw him in close with your eyes every time, and when he swoons at your lovely gaze, he’s all yours.

Part of the security that women seek from men is emotional. For us to reveal our emotions to a guy is important, but this can be a difficult concept for many guys. If you’re into someone and he genuinely listens to what you’re saying (as opposed to being glued to his phone or being too distracted by other hotties in the place), he likes you. Keep talking and as he listens, he may even try to subliminally seduce you.

3. He Pays Attention to Detail

If you’ve been hanging out together and he surprises you with something you said you wanted that he made a mental note of, he likes you because he’s trying to impress you with his listening skills. It’s a tell-tale sign that he cares enough to listen to your wants/needs and means that he also likely understands how important it is to women to find a man that can pay attention to the details. It’s the little things, really.

So men aren’t as intuitive as the female of the species, but they know how to put out their signals with body language. Once you can read a man’s signals and depending on what you’re looking for, a night out becomes like window-shopping as you decipher a potential guy’s body language.

Playing it cool, he will try to get close to you without looking anxious or eager. Too many times have awkward moments ruined potential love connections, and guys know the statistics first-hand, so he’ll stand off to the side, sneaking glances and throwing you coy half-smiles to pique your interest.

5. He Gets Your Body Movin’

Mastering the art of body language (and reading body language) will help you know if he likes you (and get you laid). To be blunt, most men are looking for casual s*x. The problem is they are not forthcoming about their real desires because they fear the very real and very high probability of rejection.

From their confident swagger to asserting their sexual availability, men use “open” body language to subconsciously attract women with a shared sexual desire. To get the sparks lit, go out dancing and see how well the two of you move together.

6. He Acts On His Best Behavior

Let’s face it, we all put on masks at some point during the dating game, and when we have a crush, we want to be confident and act on our best behavior. Guys are no different. They want to make a great impression, too. He might act one way with his buddies, but if he likes you, he’ll adjust his usual guy-tendencies to impress you. Except it can sometimes be difficult to tell if a guy is being genuine or just putting on a façade because he likes you (or, more often than not, is trying to get into your pants).

7. He Introduces You to His Friends

If you’re hanging out with a guy and he likes you, it is inevitable that you will be integrated into his inner circle of friends, which is another tell-tale sign that he likes you, because a guy’s group of friends is an island, his port-in-the-storm where he feels safe and be himself. This is good because he’s invited you into his element so that you can learn more about him and his lifestyle—it’s a huge step for a lot of guys.

8. He Introduces You to His Family

Much like earning your approval of his friends and vice versa, if a guy likes you, he will want you to meet his family (this generally happens once you’re already in a relationship) so that both you and they can size each-other up so to speak; this can be wonderful, indifferent or nightmarish depending on your guy’s family; it could even be the emotional equivalent of a gang-initiation beatdown. Survive the family and your relationship will thrive.

9. He Makes You His Muse

Men know that women like a man with a creative spirit, and if you’re crushing on a creative guy, the tell-tale sign that he likes you will be if he makes you his muse. Sparking someone else’s creative mojo is flattering to say the least, so to inspire works of art, literature and music as a means to win your heart is an amazing feeling .

10. He Gets You Something Special

This could be anything, but it’s the gesture that proves that he likes you. Bonus points for him if he gives you something you really want (other than an orgasm). Diamonds are always nice, but let’s not get preemptive.

11. He Asks You to Accompany Him

This last tell-tale sign could be his way of introducing you his family, friends or colleagues. If he invites you to accompany him on a trip (business or pleasure), to a social gathering like a family reunion or wedding. If you’re the optimistic type, even an invite to a funeral counts. The point is, he’s asking you to be his date because he likes you.

So there you have it. 10 tell-tale signs that a guy likes you. Men aren’t mysterious creatures and if you pay attention to their nuances and quirks, they will reveal their romantic intentions to you.

The Science Of Butterflies: What Happens To You When You Flirt

We all have that one friend who can flirt without even trying, and, of course, they make it …
Loren Bebensee
0

Advertisement There is being brave and there is being downright stupid. This guy has definitely pushed his luck …
relsurg
0