There is a huge amount of controversy about lies and how acceptable they are in a relationship. We decided to ask a question to all the men on our Fan Page. The question read “What embarrassing secrets do you keep from your wife / girlfriend?“

We were expecting lots of replies about silly embarrassing things men hide to save face. Instead however we received a vast number of responses saying that men should have no secrets AT ALL from their partner.

Well we are here to tell you that this may not be entirely correct. There are some secrets that men feel the need to be kept from their partner in order to keep a harmonious relationship. 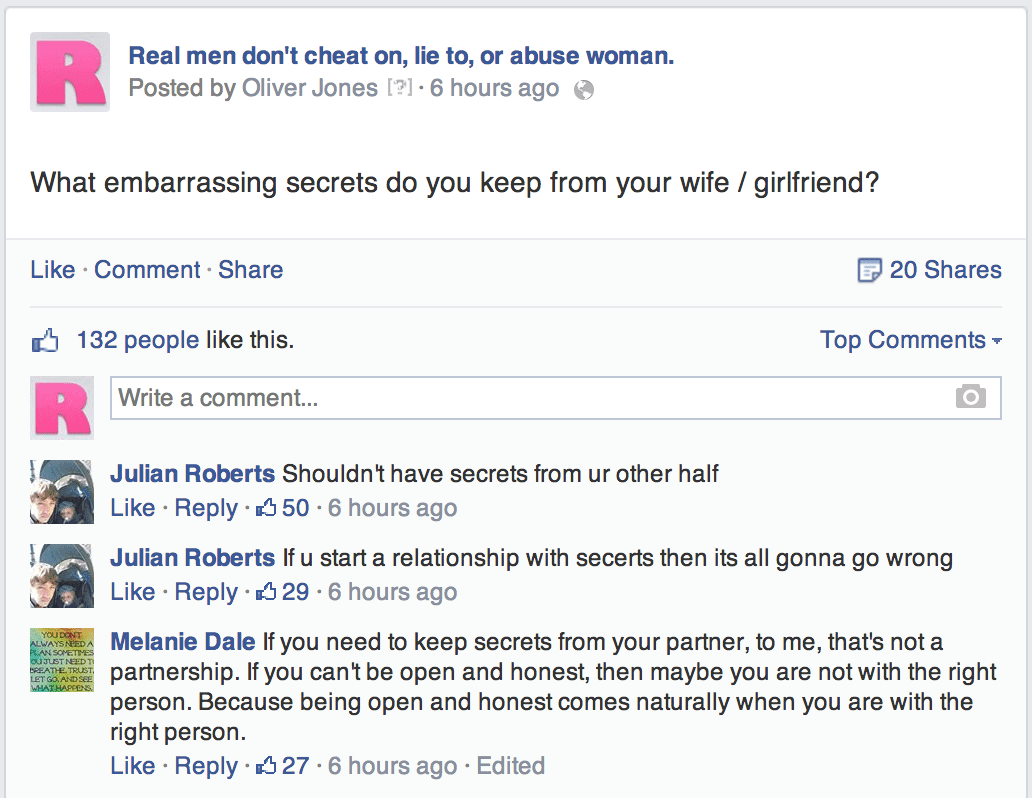 You see there are some things women find attractive in a man such as his strength or how safe she feels with him. If she found out this image of her man was not entirely as she sees it, she may be slightly put off him. And he knows that.

Some Secrets are understandable and here are 13 that prove the point.

A man likes to show strength and often that is a quality his partner seeks for in him. It is ok for a man to feel scared at times and it is also ok for men to share this with their partner if they wish. They may also take solace in their friends or family members. Often these can just be passing feelings when going through a major life experience and he deserves the right to keep his emotions to himself if he wishes.

2. Yes I did just check out another woman

Men have an inbuilt primitive instinct to seek out a potential partner. Just because they look at another attractive woman does not mean he wants to leave you or that he prefers the other woman.

3. I do like making love but sometimes just want some sex

It is great to have a regular sex life but remember sometimes he may want to spice it up a little.

I have a secret for you. Men think about lots of little fantasies that may sometimes be too embarrassing to share with you.

5. Sometimes I would rather not know

When you tell him about your period or something that makes him equally uncomfortable, just remember even though he sounds supportive, he may prefer not to know.

6. I wish you took better care of yourself

If he sees you going through 2 days with no shower or not brushing your teeth he may keep it a secret but he may actually find it a bit gross.

7. We are struggling financially

If he feels he wants to provide for you and make you 100% comfortable in life, he may be more comfortable keeping financial difficulties from you.

8. I went out to get away from you

Sometimes guys just like a bit of a break with their friends. He may not tell you but it is good for him to spend the odd night or afternoon with his friends.

9. If you give me an inch I will take a mile

He knows deep down that if you let him get away with behaving like a dick head, he will just carry on. He may not tell you but you need to be strong and never let hi play away from home. If he does, get out of there.

He wants you to feel good. If you like the way you have done your make up then who is he to change it.

11. Im embarrassed of my thinning hair

Men do not like talking about this stuff. It will worry him that thinning hair makes him less attractive to you. There is not reason to be upset with him if he doesn’t share his worrying secret with you.

He is not going to want to let you know if he isn’t happy with his body. In the same way you see all those gorgeous women’s bodies in magazines every day. He is also seeing the male version in Mens Health and GQ.

He may not want to tell you because he wants you to feel secure but he may not enjoy his job. If he decides to share this with you then great but if on the other hand he keeps it to himself while he works out what he wants, that is no disrespect to you.

So yes some of these would be better shared and discussed but it is possible to see it from the guys point of view. Maybe they sometimes get a bit of a hard time when they are just trying to make things work.

These Purple Wedding Ideas Are Perfect

Advertisement Traditional colors for a wedding are white for the bride, and grey or black for the groom. …
Melissa
0

The Heroic Stories of These Animal Lovers

We all know that we would do just about anything for our beloved pets. Without a doubt we …
Melissa
0