As well as nights of pampering, doing lunch and talking about boys, there are also the rough times in any friendship. These rough times can quickly turn into arguments and rows. The thing is, girls always make up in the end (well nearly always). Here is a list of the top 20 reasons for besties having fights.

1. You are making me feel left out
You feel so juvenile but you just cant help it. Your friend went to the cinema with another bunch of friends and didn’t invite you!

2. You have been stirring behind my back
You saw a text from your bestie being cruel about you behind your back. Let battle commence.

3. I think you have had enough
Telling your friend to slow down on the drinks is never an easy thing to do. If done without the correct strategy, you could have a cat fight on your hands.

4. You Ruined my new dress!
It is an unfortunate reality that when your friend is wearing her best dress, is the most likely time you will be a little tipsy and spill your vodka cranberry on her. Offer to pay for the dry cleaning and just keep your fingers she lets you off.

5. I like him and you hooked up with him!
Hoes over bros is temporarily suspended, everyone takes sides, and all girl code goes out the window. B*tches be playin’ real dirty.

6. I saw that top first! (while shopping)
Your animal instincts really come out when fashion is involved. It doesn’t matter if she’s your friend, you will fight harder for this garment than a Midwestern soccer mom does over tupperware at Walmart on Black Friday.

7. You are spending all your time with your new boyfriend!
Also known as, “Don’t ever miss another girls’ night again” fight.

8. The “Passive Aggressive” Fight
This is the fight in which the other person doesn’t actually know that you are mad at her. You just are running around fuming like an aggressive idiot while the other girl is blissfully unaware of your anger. Guess who loses?

9. You owe me!
You owe her for the sushi. She owes you for the cab. Deduct that from the original bill and add in a few dollars for the bar tab and now no one is really sure who pays whom and how much…Except you know she still needs to pay you for the cab. Do you ask for the money? Figure she’ll get the next one? No, you swallow the 10 bucks and next time casually “forget” to pick up that diet coke she wanted.

10. She was my friend first!
When I said that you two should be best friends, I wasn’t actually serious. Don’t forget your roots!

11. I had a crappy day and i,m taking it out on you!
If you don’t like the people in your office then just yell at them, not us please! Or pretend like you’re five and go to your room.

12. You ditched me for a guy at the bar
“I told you I needed a wingman and you totally left without telling me,” said the stranded friend.
“I know I’m supposed to feel bad because technically you aren’t supposed to leave a girl alone, but I don’t actually feel bad because technically you made it home just fine,” said the other.

13. You’ve Been Really Selfish Lately
Is it selfish for me to want you to stop being so selfish and pay attention to me!?

14. I need to tell you a harsh truth
You know the moment you share this tough love with your friend that she’s going to take the defense, but sometimes being a good friend means having to say what she doesn’t want to hear. Stand your ground and remember that she’ll be thanking you later.

15. Im calling you out for bailing all the time
Has it occurred to you that maybe the reason she keeps flaking is that she doesn’t want to hang out with you? See number 14 above.

17. Do you remember saying that?
There’s no way she’s going to let this one slide. The truth always comes out when your inhibitions are lowered and you’re spewing blackout hate. Congratulations! You’ve just reached a new low!

18. PMS… enough said!
Wait, what are we even fighting about? I just got so heated back there for no reason. Sorry for putting you through the ringer and biting your head off. Now I feel like the jolliest person on the planet. YAY Hormones!

19. You have generally been rubbish lately
You can’t put your finger on it, but your friend has been depressed and sucky and you’re sick of her being in a funk. You know what won’t motivate her to come out with you? Yelling at her for sucking.

20. I think we spend too much time together
Because you two spend so much time together (duh, you’re best friends!), you’re bound to grow tired of each other eventually and you need some space. So you venture on without her and what do you realize? Absence makes the heart grow fonder. 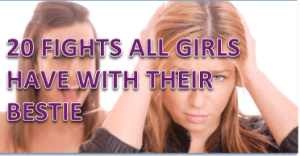 21 Reasons Why Moms Remain our Best Friends for Life

Advertisement From the minute you were born, until the age you are now, there has always been …
Melissa
13

As a friend of a Leo, I have been hearing about the birthday celebration plans since two weeks …
Loren Bebensee
6