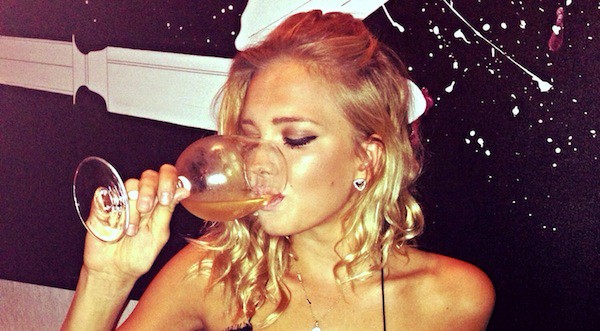 There always comes a point in the evening when you are faced with a dilemma – do I have another drink or call it a night?

Here are 33 reasons why that third drink may ruin your life:

#33 Three drinks easily turns into twelve – the third one opens the floodgates.

#32 The third one releases who you are when you are drunk. Sober you has now been silenced for the rest of the evening.

#30 You consider kissing the stranger at the bar – he was looking like a 4 earlier – now he looks like an 8.

#28 Along with Sober you, Inhibition has now left the building too

#26 It’s the drink you blame your blackout on

#22 Because bottles of wine have 4 glasses-worth in them – they figured it out for us!

#21 You swear your clothes are too tight after the third one – so you just want to take them off right then and there.

#20 It’s the opening to the rabbit hole – and we all know what happened to Alice in there!

#19 It’s the drink that make anything and everything seem like a great idea.

#18 It will make you forget tomorrow…just live in the moment!

#16 Stopping on an odd number won’t do after that

#15 Because the money has been spent for the evening – so may as well keep going!

#14 Because you might not be able to keep count after this.

#13 Your tab is already open, so what the heck?

#12 Everyone looks cute at this point – you are confident that the pics will turn out great!

#11 Someone probably bought the third one – and will likely buy the fourth.

#9 You smell like liquor already – may as well stay at the bar.

#8 You already lost your phone – may as well give up now!

#7 You already made it this far!

#4 There’s even twins there! Wow – they are everywhere!

#3 Because you are planning to take a cab home anyway.

#2 Because you brought enough cash for your cab fare.

#1 Because you already knew…the 3rd drink…gotta watch out for that one!