For a lot of women, if they came home to find a note on the table from their ‘cheating’ husband telling her he is leaving her and her 2 kids, they would likely be  very upset. They may even be a little angry with him for leaving them.

Scroll down to see the poster

In the case of this woman from Manchester UK, she took it one step further. After receiving a not from her husband telling her it is over and he is leaving her, she produced a poster.

The poster shows a photo of her husband at the top and underneath reads “Local lying cheating scumbag, married father of 2. Ran out of family and left a not to inform them.

She then proceeded to post the poster all over town so the entire local community see.

When questioned by a local newspaper, the father did not want to comment but did deny the ‘love rat’ accusations.

Locals have been questioned and seem to have mixed reactions to the posters which are plastered on bus stops, walls and lamp posts. Some seem to be in support of the woman saying “good on her”. Others however think that as the poster suggests he is a father of 2, this could be a big embarrassment to the kids and may have been better kept private. 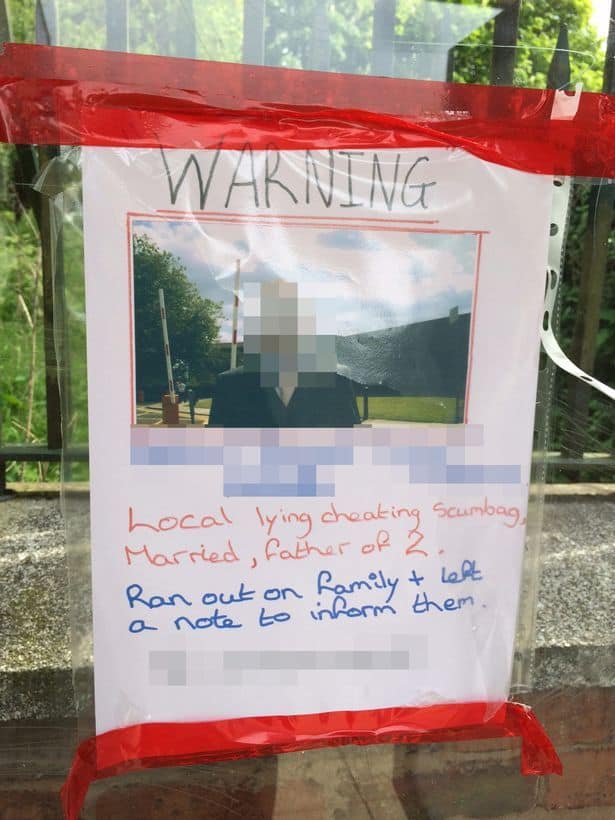 When he saw his cat carrying a tiny little chipmunk across the drive, he feared the worst. That …
relsurg
0

Elephant And Trainer Reunited After 15 Years. What Happens is Simply Astonishing