A recent post on Reddit reads “My husband [M26] sent me [F26] an immature, inflammatory email as I was driving to the airport for a 10-day work trip. Now he has cut contact.”

The post received over 500 replies from other members of the popular social network site. The original post has now been removed but it read as follows:

Yesterday morning, while in a taxi on the way to the airport, Husband sends a message to my work email which is connected to my phone. He’s never done this, we always communicate in person or by text. I open it up, and it’s a sarcastic diatribe basically saying he won’t miss me for the 10 days I’m gone. Attached is a SPREADSHEET of all the times he has tried to initiate s*x since June 1st, with a column for my “excuses”, using verbatim quotes of why I didn’t feel like having s*x at that very moment. According to his ‘document’, we’ve only had sex 3 times in the last 7 weeks, out of 27 “attempts” on his part.

She was good enough to include a screen shot of the spreadsheet. 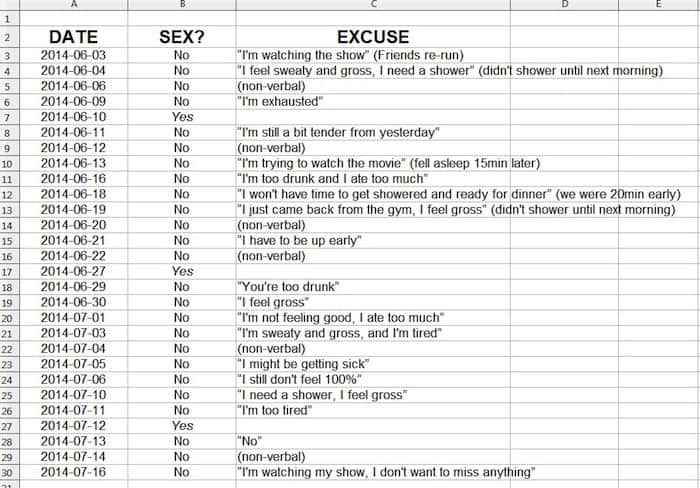 After a few replies came in, she continued her story as follows:

It’s not normal. For the most part of our relationship, we averaged 3-5 times a week I’d say? Including a non-recipricated blow-job thrown in here and there.

A few months ago I looked in the mirror and didn’t like what I saw. I looked horrible naked and none of my clothes fit nicely, I had a muffin top. I’ve been trying to eat better and go to the gym ever since.

My weekday routine has been shower, go to work, get off at 4pm, go home and cook dinner, go to the gym, watch some TV, sleep. He’s never up to have sex in the morning, and I never want to have sex after being all sweaty and gross from the gym.

This is an absolute classic example of normal life in relationships. The more people worry about how they look, the worse it will be. It is important to remember that a couples love life is closely linked with their emotional state of mind. When people feel totally comfortable in their own skin, they will be more relaxed and therefore will be more likely to want to get intimate with each other.

The husbands passive aggressive Excel Spreadsheet response is definitely the wrong way to go ESPECIALLY to send it just as his wife leaves for a trip meaning she had no time to discuss it properly with him.

Look I have a secret for you all. Sometimes couples go through droughts on the bedroom front. She may be stressed, he may have a load of work on. Both of you may have other priorities for a spell. Just roll with it and always discuss things.

NO SPREADSHEETS or other stupid communication methods as they really do not help.

SHARE this with your friends so they can avoid making the same mistake as this ass hole.

Being Hot Vs Being Beautiful. There is a BIG Difference

Be Beautiful not ‘Hot’! Advertisement  Far too often it seems girls are trying to conform to an illusion …
relsurg
10

The Majority Of Girls Are Being Influenced By These Images

Advertisement I know, I know, we have all seen it before. Photoshopped celebs… What we don’t see too …
relsurg
8